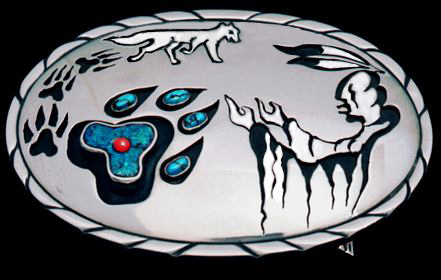 As a jewelry maker, a graphic designer and a writer of blogs and articles, I sometimes ask myself: where does my inspiration come from? And: which artists inspire me the most? Part one of a new blog series.

The first question is the more difficult one to answer since there is no simply-cut answer.

So, since the answer would be too complex to fit in the rather simple context of a blog post, I will not dwell on it further here.

As for the second question, who provided the most inspiration, the answer is simple - yet also slightly paradoxical.

I say without hesitation that it is the late Anishinaabe (Ojibwe) painter Norval Morrisseau, by far the most important Canadian artist that ever lived and whose traditional name was Miskwaabik Animikii (Copper Thunderbird), who has been my main inspirator - long before I even realized I had artistic ambitions.

The paradoxical element lies in the fact that two entirely different art disciplines are involved: where Norval Morrisseau - and those many other brilliant Native Canadian artists who followed Morrisseau's footsteps in the form of the New Woodland School of Art - used to be painters pur sang, I chose silversmithing as the primary means to express myself. 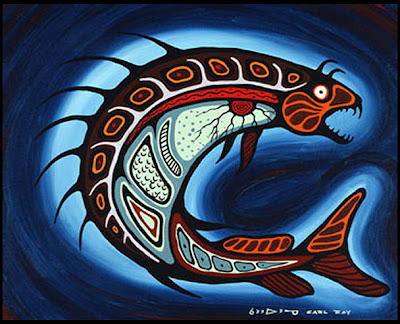 Stylistically speaking, however, there are other artists who more or less follow the Woodland School discipline but use a more minimalist style than Morrisseau. These artists exert a profound influence on my work - even more than Morrisseau himself. The first painters and graphic artists who come into mind here are, among others, the late Jackson Beardy, the late Carl Ray, the late Benjamin Chee Chee, the late Cecil Youngfox, Stanley Panamick, Samuel Ash, James Binijima Simon, Leland Bebaminojmat Bell, Simone McLeod, and Clemence Wescoupe. Yet it was Norval Morrisseau who re-awakened my spirit memory and opened my eyes because he, by inventing an entirely new language, made visible with the aid of a paintbrush unspeakable things that I felt inside but could not describe before.

Above all, Norval Morrisseau, who went by the spirit name of COPPER THUNDERBIRD and started to paint in the very year I was born (1959), made me realize that the job of an artist is always to APPEAL TO THE INNER SPIRIT and DEEPEN THE MYSTERY THAT IS ALWAYS THERE UNDER THE SURFACE.

So, Copper Thunderbird is the reason why I chose the artist's path.

“I wanted to be a Shaman and an artist. I wanted to give the world these images because I felt this could bring back the pride of the Ojibwa, which was once great....My aim is to reassemble the pieces of a once-proud culture, and to show the dignity and bravery of my people.”

About the buckle design 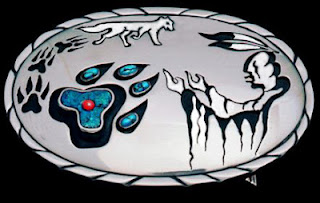 This silver-and-turquoise/red coral belt buckle I once created for my long-time friend Frits Terpstra. Even after so many years he still wears it with pride and right below his belly - well, the last time I checked anyway.

The design, with its flowing outlines and explicit narrative character, originates from the deep appreciation I feel for my Anishinaabe heritage - a once hidden treasure that Norval Morrisseau made me aware of in various different ways and levels of consciousness, more than I would ever have thought possible.
The symbolism

The overlay design, in which human and animal realms mystically merge, features black-outlined imagery inspired by the sacred texts of Anishinaabe/Algonquian traditional stories.


The design, which is reminiscent of the graphic tradition of the New Woodland School of Art - particularly the minimalist style of, for instance, Benjamin Chee Chee and Stanley Panamick who used simple, flowing outlines set against a light background -, symbolizes an invocation of the Spirit of MA'IINGAN (Wolf). It is an appeal for guidance and skills and strength to make the right decisions.

- A petition for the wolf's good medicine


The buckle depicts the story of MA'IINGAN, an Anishinaabe hunter. He belongs to the wolf doodem, and you can see him with outstretched arms, praying to his bawaagan or personal "guardian spirit" asking him for strength and spiritual guidance; he even becomes one with it.

Native spirituality, contrary to the great world religions, has a strictly individual character. An Anishinaabe person will find protection in the course of his life by following the Anishinaabe Mino-Miikana, the Good Native Road, through the sacred songs and medicinal formulas of the Midewiwin or personal objects such as amulets and medicine bundles - and through dreams and seeking visions that evoke special spiritual powers.

These powers, which may be collected in varying degrees, often appear in the form of bawaaganag or dream visitors.

A bawaagan or baawaagegan - like the wolf in the belt buckle - presents himself as a spiritual helper, who personally provides the dreamer with special blessings enabling him to exercise exceptional powers of various kinds, and bestows upon him (or her) control over some area of human experience that is of assistance in the daily round of life.

Examples are: the healing of ailments, or predicting the future, or encouraging the young to develop individuality and self-growth, or exercising good leadership, or being a good mother, or keeping family and community amply supplied with food and materials, or making beautiful or powerful works of art; or whatever special social skill is needed to help keeping intact the framework and well being of Anishinaabe society.

An animal doodem (totem), such as that of the wolf, is really a social organization, making all Anishinaabe persons born under its sign one in birth, function, and purpose. A given doodem basically denotes one of the five main needs of the People and one of the five elementary functions of Anishinaabe society. The animals that feature the five principal totems (or clans) are: AJIJAAK the Crane (leadership), WAABIZHESHI the Marten (Food and military strategies), AWAASII the Catfish or AGWADAASHI the Sunfish (Science), and MISHIIKENH the Turtle (Medicine). MAKWA the Bear and MA'IINGAN the Wolf represent the Defense (Warrior) totem.

Without a wound, unmarked
Will I go home.")


Creation proces of the belt buckle

This solid buckle, which is 3.3 inches wide by 2.4 inches high, is executed in a combination of two (related) silversmith techniques. These techniques originate from the American Southwest: overlay and the domed shadowbox. A heavy plate of silver is cut out in the oval shape of the buckle, hammered into a dome shape, and then 'worked open' with a jeweler's saw.

This means I cut out the outlines and all the individual interior segments of the designs of hunter, wolf, and paw; including the "shadowbox" frames of the paw, into which, eventually, the settings for holding the turquoise stones will be soldered.

The domed plate I then soldered (overlaid) on top of another silver plate. Thus a hollow space was created. Next, the various parts of hunter and wolf were put (soldered) back in place, like pieces of a puzzle. Then the bezels for holding the stones were made and soldered inside the corresponding 'shadowbox' frames.

Next, sulfur, in a liquid form, was applied to the bottom layer of silver that shows through the cutouts.

This oxidizes (darkens) all recesses and interior 'lines' of the designs. Finally a high polish is put on the raised surfaces. This, in combination with the darkened recesses, creates the illusion of depth, and adds a rather pronounced, almost threedimensional quality to the overall design.

My merging of the above-mentioned metalworking techniques into a wide range of influences of the graphic art of the Canadian Woodland Painting School has resulted in a unique style, which is both quintessentially Native and absolutely modern.

The "Appeal to Brother Wolf" design, with its explicit narrative character, is indeed an artistic statement, testifying to the deep appreciation I feel for my Anishinaabe heritage. 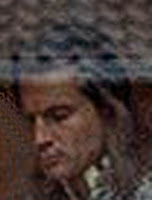 About me and my sources of inspiration:
My name is Zhaawano Giizhik.  I am an American currently living in the Netherlands. As an artist and jewelry designer, I like to draw on the oral and pictorial traditions of my Ojibwe Anishinaabe ancestors from the American Great Lakes area. For this I call on my manidoo-minjimandamowin, or 'Spirit Memory'; which means I try to remember the knowledge and the lessons of my ancestors. The MAZINAAJIMOWIN or ‘pictorial spirit writings’ - which are rich with  symbolism and have been painted throughout history on rocks and etched on other sacred items such as copper and slate, birch bark and animal hide - were a form of spiritual as well as educational communication that gave structure and meaning to the cosmos. Many of these sacred pictographs or petroforms – some of which are many, many  generations old - hide in sacred locations where the manidoog (spirits) reside, particularly in those mystic places near the coastline where the sky, the earth, the water, the underground and the underwater meet.
Posted by Zhaawano Giizhik at 3:39 AM