Teachings Of The Eagle Feather, Part 3

We honor you, little snakes!


This 47 x 47 mm (1.85 X 1.85 inch) sterling silver belt buckle was made in honor of the Akicita Oyate, the Dakota/Nakoda/Lakota warriors of yesterday and today.


The Naadowe-isiwag (or Naadowensiwiig: "snakes"), also called Bwaanag (signifying "Those Who Roast Dogs"), have long been known as the traditional, mortal enemies of the Anishinaabeg. However, nowadays both nations are allies and friends, and instead of “enemies” or “snakes,” the DAKOTA (Isáŋyathi/Santee), NAKODA (Hohe-Assiniboine/Stoney), and LAKOTA (Thítȟuŋwaŋ/Teton) who make up the great nation of the OCETI SAKOWIN (People Of The Seven Council Fires) are regarded by the Anishinaabeg as niikaanisag minawaa nindaawemag: "our brothers and sisters."

Living proof and symbol of the friendship between the two nations is Leonard Peltier, a contemporary warrior of the American Indian Movement, US political prisoner, and perhaps the most renowned Native North American alive today. Leonard Peltier was born to a Lakota mother and an Anishinaabe (Ojibwe) father. 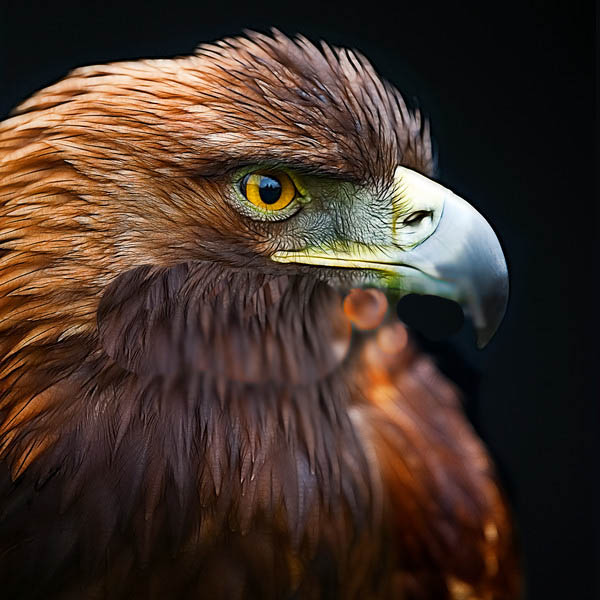 Flight of Giniw the War Eagle


The silver head design of this Lakota Warrior buckle features a sculpturally stylized design of a miigwani-wiiwakwaan or large feather bonnet, a majestic headdress that has never been characteristic of the Anishinaabeg of the northwoods, yet worn exclusively by the warriors of the western Plains. The bonnet consists of many wing feathers of OGIMAA MIGIZI the White Headed Eagle, whom the Anishinaabeg have always considered a sacred spirit bird that lives in the East. 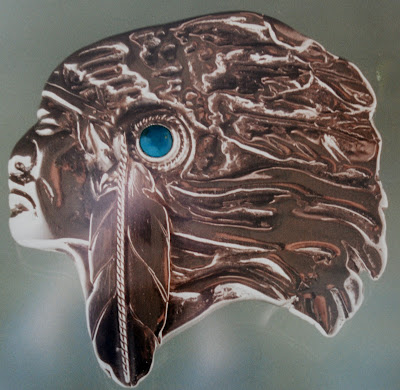 The broad tail feather hanging down from the side of the bonnet, which comes from GINIW, the mighty war eagle who flies so high he almost touches the Sun, symbolizes the historic strength of the Akicita Oyate of the Seven Council Fires.

The feather stands for vision and courage, and also makes reference to the leading historic role that the Dakota and Lakota nations have played in the allied resistance of Native Peoples against the United States armies - and still fulfill in the American Indian Movement. Above all, the feather represents the obligation of an akicita (warrior) to maintain a high moral standard within his or her oyate (community) and in life.

The blue of the turquoise cabochon mounted on the warrior’s bonnet, right above the big eagle feather, symbolizes WAKAN, the power of spirituality; blue relates to the cleansing, purifying Cedar from the South. Blue also means Sky, and Prayer; but above all, the circular-cut stone illustrates an everlasting peace between two powerful nations that have always lived on lands bordering each other. 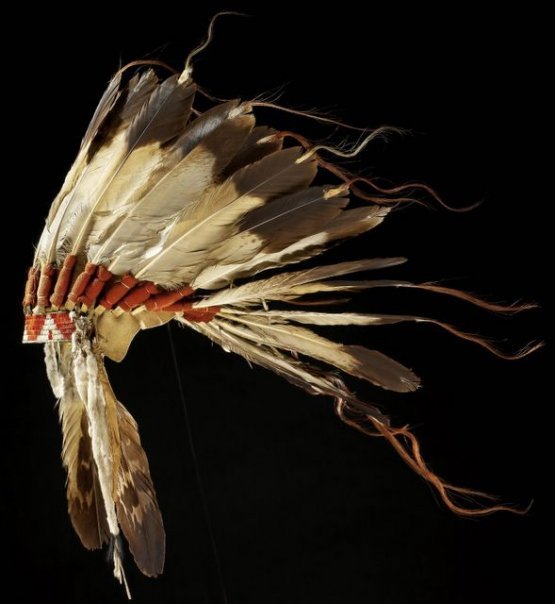 "Against the chief
My arrows break
as against a rock."

- Dakota song of praise during a peace pipe offering, sung in Anishinaabemowin (the Ojibwe language).


Simone McLeod (her traditional name is Aki-egwaniizid, which is an Ojibwe name meaning "Earth Blanket") is a Nakawe-Anishinaabe painter and poet, born in Winnipeg, Manitoba in 1962 and a member of Pasqua First Nation in Saskatchewan. She belongs to he Name doodem (Sturgeon clan) and feels special kinship with her mother's people, the Azaadiwi-ziibi Nitam-Anishinaabeg (Poplar River First Nation) of Manitoba. Simone descends from a long line of Midewiwin seers and healers and artists. Her artwork has been appreciated by several art collectors and educational and health care institutions from Canada, as well as by art lovers from all over the world.

Zhaawano Giizhik, an American currently residing in Amsterdam in the Netherlands, was born in 1959 in North Carolina, USA. Zhaawano has Anishinaabe blood running through his veins; the doodem of his ancestors from Baawitigong (Sault Ste. Marie, Upper Michigan) is Waabizheshi, Marten. As an artist, a writer, and a designer of Native American jewelry and wedding rings, Zhaawano draws on the oral and pictorial traditions of his ancestors. In doing so he sometimes works together with kindred artists. He has done several art projects with Simone in the past.