Reawakening of the Medicine People, Part 3 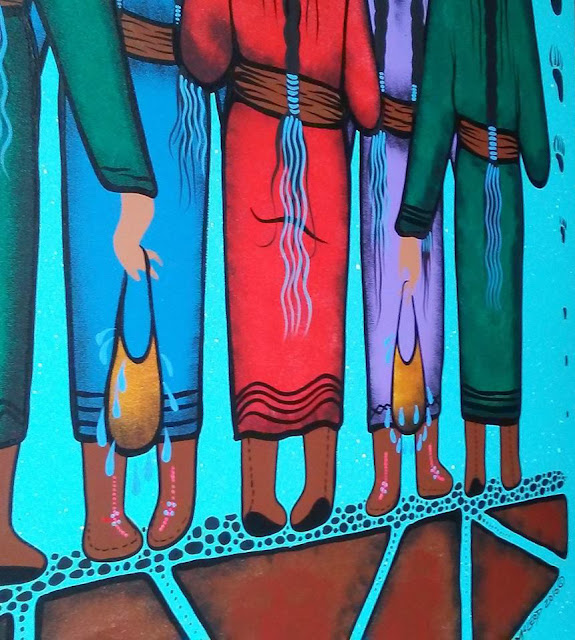 
A Tribute to the Medicine Warriors of our time

This blog post is part 3 in a series titled "Reawakening Of The Medicine People". Today's blog story is an ode to the women warriors of our time who dedicate their lives and sacrifice for the water.

In our Anishinaabe tradition, one is a warrior by doing what must be done to protect the environment and society and advance their cause - even if it's on a modest scale or in the smallest of ways.

DOCTORS are warriors because they battle illness; TEACHERS are warriors because they battle lack of knowledge. TREATY LAWYERS and POLITICAL and ENVIRONMENTAL ACTIVISTS dedicated to the inherent land rights, sovereignty, and First Nations self-government are warriors. A SINGLE PARENT raising his or her child or children in difficult circumstances, instilling in them a code for upright living, is a warrior. A PERSON WHO DEFEATED ALCOHOL AND DRUGS and has returned to the red road, the spiritual ways of his People, is a warrior. A SUNDANCER who fasts and dances from dusk till dawn sacrificing for the sake of those who need mental, spiritual, and physical healing is a warrior. NURSES, MIDWIVES, and SOCIAL WORKERS who distinguish themselves by offering vital help in disadvantaged rural areas or on remore reservations; they, too, are warriors. ANYONE can be a warrior, and all he or she has to do is protect, and stand up for, the community or individuals or ideals.*
It is our belief that, since water represents life, it's the Water Walkers, the women who are the keepers of Gichi-Nibi, the sacred water circle, and those grandmothers who are responsible for reviving and maintaining the ancient Mide water song of the Anishinaabeg Peoples of Turtle Island, all those countles Anishinaabekweg who earn high praise and deep respect for traversing on foot many thousands of miles around each of the Great Lakes and beyond, - we believe all these women are the true warriors of our time. They are NIBI-MIDE-OGICHIDAAKWEG, Medicine Warriors for the Spirit of the Water.

* Source: The Good way of the Warrior by Simone McLeod and Zhaawano Giizhik.

Simone McLeod (her traditional name is Aki’-egwaniizid, which is an Ojibwe name meaning "Earth Blanket") is a ᓇᐦᑲᐌ (Nakawē Anishinaabe) painter and poet, born in Winnipeg, Manitoba in 1962 and a member of Pasqua First Nation, Saskatchewan. She belongs to he Name doodem (Sturgeon clan) of her mother's people, the Azaadiwi-ziibi Nitam-Anishinaabeg (Poplar River First Nation) of Manitoba. Simone descends from a long line of Midewiwin seers and healers and artists. Her artwork has been appreciated by several art collectors and educational and health care institutions from Canada, as well as by art lovers from all over the world.

Zhaawano Giizhik, an American currently living in the Netherlands, was born in 1959 in North Carolina, USA. Zhaawano has Anishinaabe blood running through his veins; the doodem of his ancestors from Baawiting (Sault Ste. Marie, Upper Michigan) is Waabizheshi, Marten. As an artist and a writer and a jewelry designer, Zhaawano draws on the oral and pictorial traditions of his ancestors. In doing so he sometimes works together with kindred artists. He has done several art projects with Simone and hopes to continue to do so in the future.