Star Stories, part 20: The Great Thunderbird That Dwells Among the Stars

"The Great Thunderbird That Dwells Among the Stars" 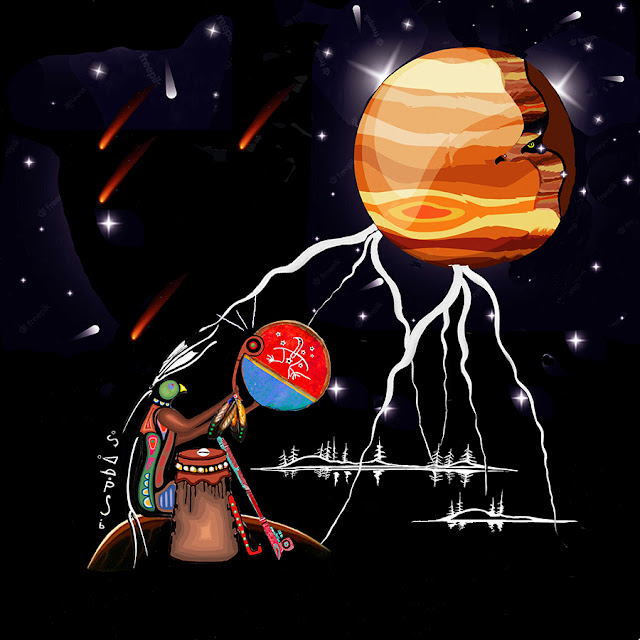 In today's story we will be dwelling on the phenomenon of the Thunderbird, whose supernatural presence is not only to be found in the earth's natural phenomena – in the form of thunder, lightning, rain, tornadoes, and hurricanes – but also in the night sky.

The Binesi (Thunderbird) motif figures prominently in several Ojibwe Anishinaabe stories, ceremonies, and depictions on rock, tree bark, animal hide, metal, and canvas and is the overall symbol that unifies all Anishinaabeg. See the illustration below of a hand drum, its deerskin membrane depicting a stylized image of a Thunderbird lowering itself to earth through the Bagonegizhig ("Hole in the Sky," the Pleiades constellation), thus connecting the star world with the earth (the red paint) and the water (the blue paint).

According to traditional Anishinaabe anang nibwaakaawin (Ojibwe star knowledge), Thunderbirds are part of the great gathering of all beings. They came to Earth to help out the anishinaabeg (humans) as well, which is still reflected in the Binesi Doodem, the Ojibwe Thunderbird clan. Whoever is born in the Thunderbird Clan knows that their origin lies somewhere with the Thunderbird constellations in the Great Galaxy.

In our anang gikendaasowin (astronomy), the Thunderbird is known as a winged representation of how in the beginning of times the powerful Thunder Beings helped out all of our mother Earth’s relatives in our solar system. The Thunderbird travels along the path of all of our Mother Earth’s relatives in the night sky. This path is the same as the Ma'iingan Miikana or Wolf Trail (called Ecliptic in Western astronomy: the plane of Earth's orbit around the Sun). 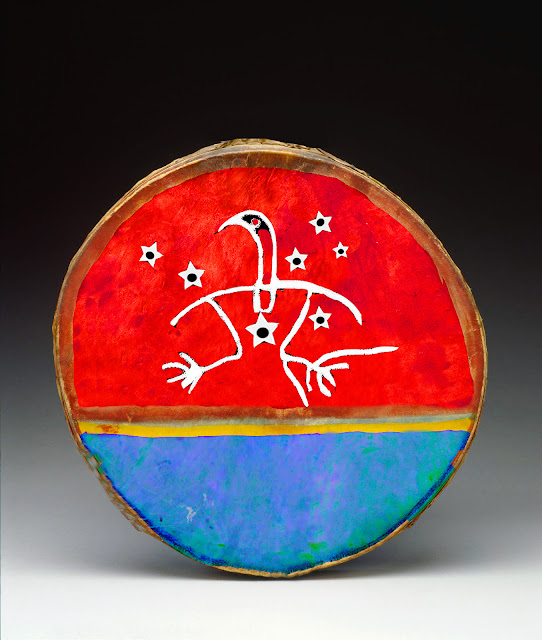 It was the Thunderbird who helped create our Mother Earth by bringing water to the earth. When you hear the thunders, it is the rain that follows. Thunderbird was sent by Wenabozho – a semi spirit central in Anishinaabe creation storytelling – to bring fertility to the earth and to protect the Anishinaabeg against underground and underwater creatures, and also to teach them to organize themselves in odoodeman (clans), thus shaping the bedrock of a strong society.

While Thunderbirds are associated with taloned birds like eagle and hawks, they are also known to appear along with all the other migrating birds as soon as the winter is over, and by the time the trees shed their leaves they are believed to return to their nests on top of table mountains – or even farther away, to the star world – to rest until spring arrives. 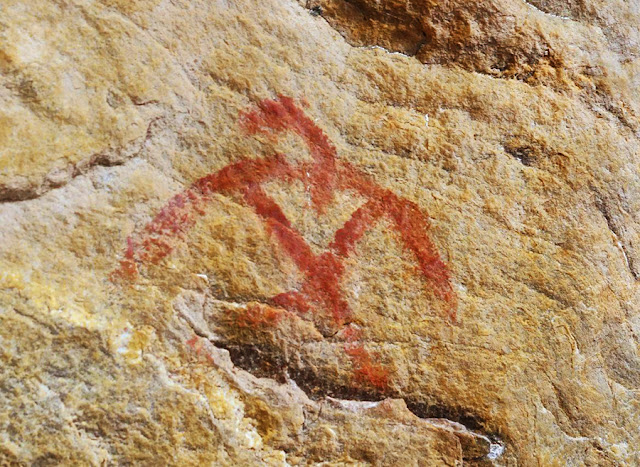 As “spirits of the sky realm,” Thunderbirds are considered the most pervasive and powerful beings of all the aadizookaanag – Spirit Grandfathers, Supernatural Makers of Stories – that guard the cardinal points of the Universe. They are related to water and to the south and the summer – which is the time of year when the storms rumble over the Great Lakes. The peal of thunder echoing from every side of the lakes – often surrounded by dense forests and bordered by rocks – makes it impossible to be unaware their powerful presence. The Binesiwag leave their homes among the stars and on high cliffs and mountain peaks in the west in the beginning of spring and come to Earth in different forms and guises and sizes – as winged beings, or sometimes even in human form – to visit the Anishinaabeg and also to drive off the (possibly malevolent) underground spirits from the Earth and the waters of lakes and rivers. They are in charge of the warm weather and procure and maintain the warm seasons on Earth, which is why they migrate with the birds that appear in spring and disappear in the fall. Their thunder claps herald the presence of powerful manidoog or Spirit Beings, and their lightning arrows carry strong Medicine. 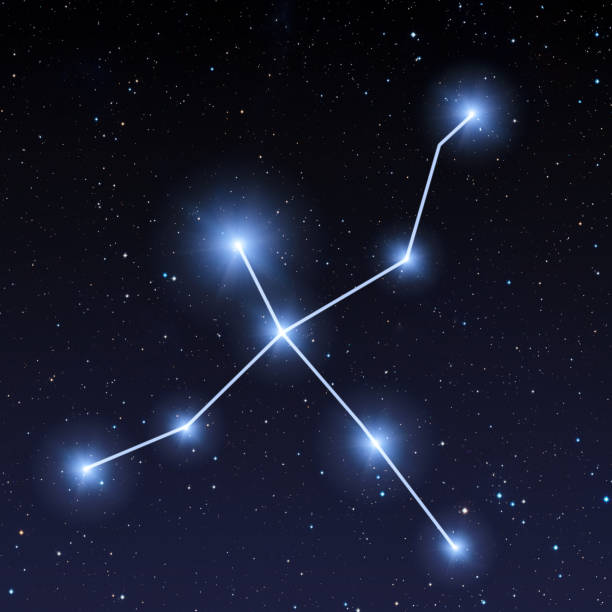 STELLAR REFLECTIONS IN THE NIGHT SKY

The Binesi constellation is the stellar reflection of the binesiwag that visit the below-world in spring and summer. It is believed that some of the old mazinaajimowinan (paintings and inscriptions) of the Thunderbird figure that can be found on cliff walls all across the Great Lakes and a vast territory to the north and northwest are artistic depictions of the celestial Binesi constellation.

It has been suggested that some depictions of the Binesi star formation are equivalent to the constellation of Ajijaak, the Sandhill Crane. (To the Anishinaabeg, both Binesi and Ajijaak are ogimaag or leaders; where crane is the first in council, the Thunderbird is a leader in the spiritual and ceremonial domain.) The Binesi/Ajijaak star formation (see above image) is called Cygnus (the Swan) in Western astronomy. It is also possible that our ancestors regarded the nearby constellations of the Pegasus/Andromeda as a Thunderbird. Other traditional sources see the Thunderbird in the spring-through-fall constellations named Libra, Virgo, Ophiuchus, and Serpens on Western star maps.

Ophiuchus (see image below), which in Greek mythology/astrology was depicted as a man grasping a serpent, lies between Aquila, Serpens, Scorpius, Sagittarius, and Hercules, northwest of the center of the Path of Souls/ Milky Way. The southern part lies between Scorpius to the west and Sagittarius to the east. In the northern hemisphere, it is best visible in summer. It sits opposite of Gaa-biboonikaan/Orion.

There is no reason to think that there could only have been one Binesi constellation; to our ancestors, the region of the night sky was filled with Thunderbirds. As for the rock paintings, the many artistic depictions of binesiwag might well represent different constellations in the night sky.

The lllustration below shows part of the Miingan Miikana or "Wolf Trail," which is the Ecliptic path of the Sun. On it, a Thunderbird dwells in the form of a star formation consisting of parts of Ophiuchus and the Zodiac constellations of Libra, Virgo, and Serpens. The seven stars (sweat lodge stones) of the madoodiswan, or Sweat Lodge constellation (Corona Borealis) are visible on the right above the Thunderbird. This constellation is also regarded as Binesii-wazison, or the Thunderbird's Nest.

Also called Animikiii-wazison, this spring and summer constellation, depending on the perspective of the storyteller and the context of the story told, is also known as the Madoodiswan (Sweat Lodge). When this constellation (depicted here as seven bright stars) rises above the tree tops of the forest the Anishinaabeg know that ziigwan (spring) is approaching and the land comes back to life after the winter cleansing.

The Sweat Lodge plays a sacred role in many Native cultures throughout Turtle Island (North America), including that of the Anishinaabeg. The basic design for a madoodiswan – as is the Ojibwe word for the sweat lodge – is a low canopy of wooden poles covered with animal skins or canvas cloth. Participants gather within the madoodiswan as heated stones – sometimes addressed as nimishoomisaabikoon, "Grandfathers" – are brought in and placed in a depression in the center. Water is poured over the stones to create steam. The madoodiswan is a place to cleanse and heal the spirit, mind, body, and emotions.

In the old days, Anishinaabeg weshkiniigijig (youth of both genders) underwent a ritual complex called makadekewin, or “Vision Quest.” They received preparatory instructions for the makadekewin from their grandparents or trusted community Elders. Final preparation required gii'igwishimowin, or spiritual fasting, which typically lasted eight days. The waaseyaabindamowin, or dream-vision (literally: "being in a state of being light, or clear") was usually sought after in remote, mystic spots where there was a large density of spiritual presence. Isolated fasting and plaintive contemplation, usually for four days and nights, were necessary to reach such a state of spiritual enlightenment which, once realized, ideally provided for guidance for life. In times of confusion, stress, or trouble, the owner of a waaseyaabindamowin could reflect on the most minute elements of the dream-vision or upon the broadest cosmological symbolism of the dream-vision. The waaseyaabindamowin was usually of a bawaagan: a guardian spirit in the form of an animal or a bird. The subject of the waaseyaabindamowin could be an awe- inspiring thing, animal, or natural phenomenen, such as Thunder, which had profound cosmological significance.

The higher the altitude of the location and the more powerful the subject of the dream, the more spiritually powerful the dreamer would become in his later life. A dream-vision of Migizi (Bald Eagle), or a Giniw (Golden Eagle), or an Eshkamegwenh (Osprey), and, particularly, a Binesi (Thunderbird), was deemed gichi-mashkawendaagwad (extremely powerful). A possible stage for such a dream-vision could be a bird's nest at the top of a tall, limbless zhingobiiwaatig (pine tree) at the edge of a steep cliff. But such elevated places, filled with dangerous levels of the spiritual energy of the raptorial birds that inhabited them, were only reserved for the bold; no humble or timid youth would seek such a dream since they would likely fall to death... Lesser visions that were less demanding on the dreamer were never a cause for shame. Yet there are instances known of Anishinaabe teenager vision-seekers who were bold enough to go out to a rocky area to build a nest of sticks in a tall tree; some of them even stayed seven or nine days or whatever it took to achieve a vision. Needless to say that if they received a vision and could make it back to their community alive, their future would be marked with gichi animikii-manidookewin (great thunder power).

The Binesii-wazison constellation in the night sky is a reflection of the Thunderbird nests that can be found at higher altitudes on Earth. Persons who laid eyes on these nests and were lucky enough to live to tell about it, returned with stories of how they spotted Binesii-waawananoon (Thunderbird eggs)⁴ in the nests; it is these eggs that we can still see in a clear night sky in the form of a constellation of seven bright stars close together, it's bowl-shape suggesting the shape of a Thunderbird nest. See also: Ajijaak, Binesi, and Madoodiswan.

In our Anishinaabe star stories the Thunderbirds came from Gichi-ogimaa Wasomaad Aki (The Great Bright Leader; literally: "Great Chief Lightning World") – known as planet Jupiter in Western astronomy. This is the planet where the thunder and lightning are born, live, and never die. Other names for this planet are Ogimaa (Chief) and Zhaawan-anang (Southern Star). it is the fifth planet from Gimishoomisinaan Giizis (Our Grandfather Sun) and the largest and oldest of the akiin anangookaaning (planets) that orbit the Grandfather.

This planet, along with the the Thunderbird constellations, were placed in the above-world to remind us of the arrival of the Thunderbirds in the spring season on Earth in the form of thunderstorms, tornadoes, and hurricanes.

Our ancestors knew a big storm was coming when clouds of animikiiwidikomag ("thunderbugs," giant moths) would arrive and cover their camp. This would be a clear sign for them to prepare for powerful winds.

In the fall time the thunderbird constellations can be seen fading away in the west while they take the powerful winds along with them.

Once in a while, however, a Thunderbird will remain throughout the winter time. When this happens we know that we must prepare for a long and harsh season...