"Heartbeat of The Earth"

In this blogpost, we will dwell a little further on our pictorial and jewelry art and the ancient teaching stories that we share along with it. Here's part 10 of a series that wants to explore (and describe) the spiritual relationship between the world of our Native forefathers, the land they lived on, and the beings that surrounded them.

We will discuss the concept of GICHI-MANIDOO, the Great Mystery of the Universe. We will talk about Sleeping Giant, the sacred island in Thunder Bay where Wiinabozho, the most beloved manidoo of the Anishinaabe People, found his eternal resting place after he was turned to stone. The main focus in this post, however, will be on the meaning of the Midewiwin drum, whose beat has since time immemorial attuned the heartbeat of the Ojibwe Anishinaabe people to the pulse of Aki, the land.

The Anishinaabe-Ojibwe-style wedding rings shown on this page, their strong graphic designs reflecting the outline drawing style of the Native Woodland Painters, mirror in color and form the pictographic and oral traditions of the ancients. The rings tell of all these things that have for many generations been handed down by the elders.

The rings, like the elders, are storytellers in themselves.


Traditionally, our ancestors that lived in gaa-zaaga'eganikaag, the land of many lakes (the North American Great Lakes area), have always been aware of an existence in the cosmos that vibrates with a sacred, creative energy.


The sum of this cosmological energy - or manidoo- is called GICHI-MANIDOO: literally ‘‘Great Mystery.’’ This sacred existence Zhaawano tried to capture in the above shown multicolor gold-and-silver wedding bands. 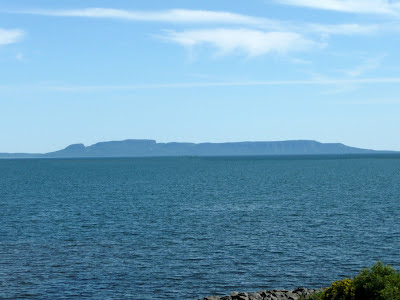 The SLEEPING GIANT at Thunder Bay, according to Anishinaabe tradition the sleeping body of a petrified manidoo, inspired Zhaawano into designing the ring set; its amazing silhouette even served as a model for the two adjacent human faces and bodies that, depicted in a dramatically stylized fashion, can be recognized in the design of both rings.

==Symbolism of the rings==


The title of the wedding ring set is GOOKOMISINAAN-BAPANGADE'EWIN, literally: ‘‘Heartbeat of Our Grandmother.’’ The red gold part and the oxidized outline of the ring designs represent the bodies and spirits of two soul mates becoming one with each other and with the earthmother herself. It serves the notion that from her fertile womb we sprang, and unto Mother Earth we shall return. 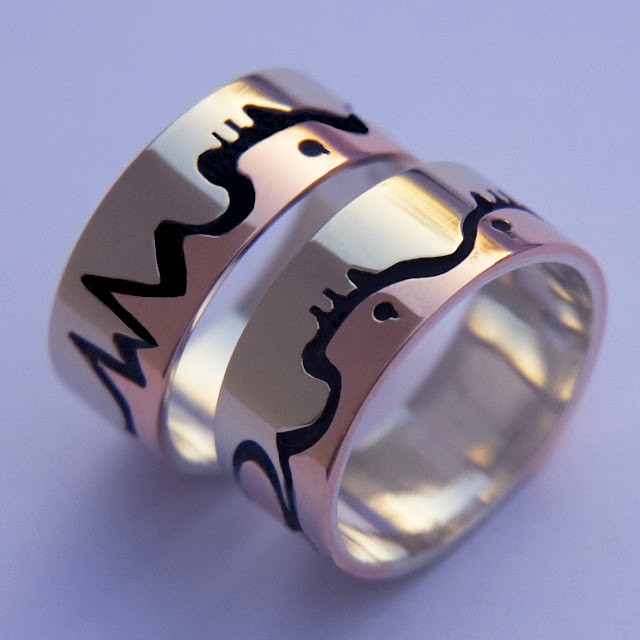 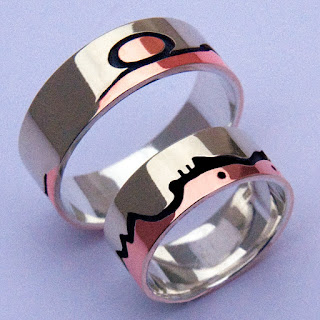 The graphic , oxidized ‘‘earth line’’ that runs across the surface of both rings, showing the characteristics of the earth surface as well as the anatomy of the human body, symbolically connects the individual to the cosmos through a ‘‘sound’’ that represents all aspects of GICHI-MANIDOO.

The Anishinaabe ancestors believed it to be important that a person joined his or her voice on a regular base with the voices of the spiritual world. This concept is called aanji-nkweshkamong enweying shka-kimi-kweng: ‘‘Reconnecting our voice with Creation.’’

One side of the rings shows a heartbeat graphic; on the other side a red gold, oval-shaped inlay design of baagaakokwaan is constructed - a drum stick representing the MIDEDEWE'IGAN (also called mitigwakik), the ‘‘Grandfather’’ water drum that belongs to the Midewiwin, the age-old Society Of The Way Of The Hearbeat. A sacred instrument circular like life itself, and believed to have been a living soul long before first man walked the earth. 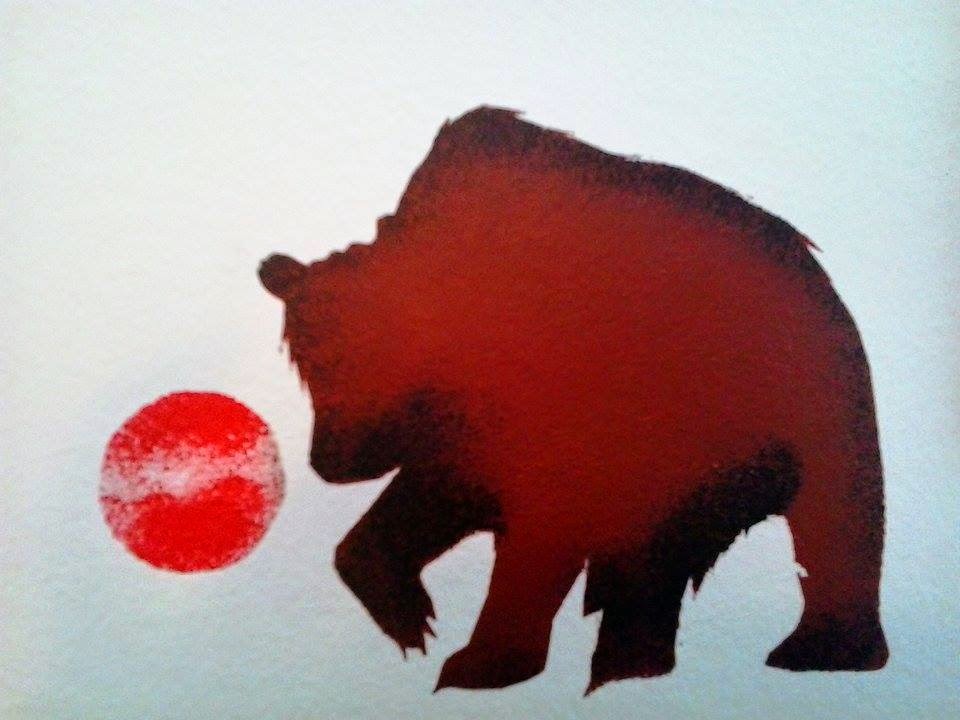 According to Midewiwin belief the sound of the Mide drum causes the sky to brighten up and the water to be calm for the person who carries the drum. Both midewe'igan and baagaakokwaan are considered to be gifts from Gichi-manidoo; the latter is held even more sacred than the drum itself.

The stylized heartbeat and drumstick designs in the ring symbolize the heartbeat of our mother the Earth, and at the same time the heartbeats of two individuals in love with one another, joined with those of all living creatures that surround them.

Listen closely. You might be able to hear the combined sound of countless hearts filling the Universe, each pulsing at their own speed, yet each a part of the whole... 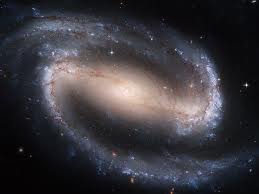 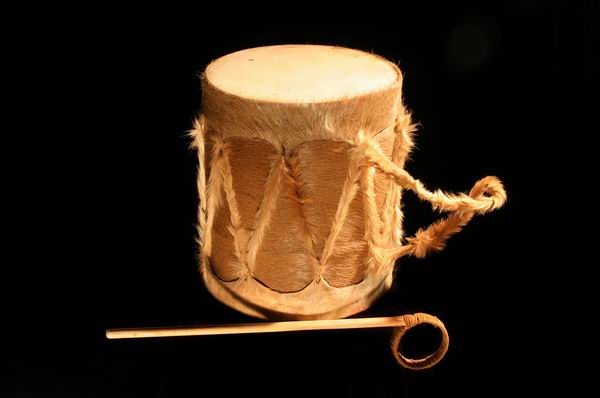 
DRUMS OF MY FATHER 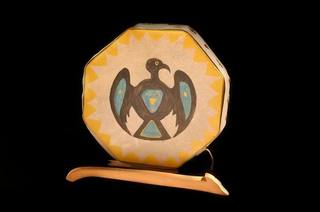 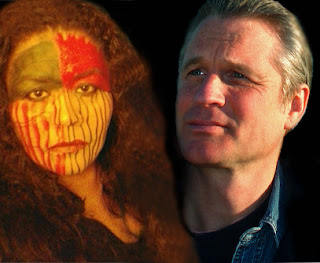 Simone McLeod (her traditional name is Aki’-egwaniizid, which is an Ojibwe name meaning "Earth Blanket") is an Anishinaabe painter and poet, born in Winnipeg, Manitoba in 1962. She belongs to he Name doodem (Sturgeon clan). She feels a special kinship with her mother's people, the Azaadiwi-ziibi Nitam-Anishinaabeg (Poplar River "#16" First Nation) of Manitoba. Simone descends from a long line of Midewiwin seers and healers and artists. Her artwork has been appreciated by several art collectors and educational and health care institutions from Canada, as well as by art lovers from all over the world.