Love Stories from the Land of Many Lakes, part 4

"The Flower and the Star"

Today's story is the fourth in a new blog series named "Love Stories From the Land of Many Lakes."

It is a collection of love stories written and provided with jewelry images and illustrations of paintings and drawings by our hands. The stories are based on aadizookaanan (traditional stories) of our People, the Ojibwe Anishinaabeg of Gaa-zaaga'iganikaag, the land of many lakes - the Great Lakes area of Mikinaakominis (Turtle Island; North America).

These narratives are of a sacred, healing nature and told within a romantic context, their allegorical themes often provided with a personal touch. The following tale is a zaagi'iwewiwin aadizookaan (sacred love story). It is narrated in the form of a frame story, in this case a metaphoric tale of a traditional, sacred nature placed within a larger story that has also embedded in it some autobiographical elements.

The story we will relate today is about the impossible friendship between a man and a woman that, however, is so strong that it grows and flourished against all odds and thus becomes a teaching story about following your dreams, a sacred tale of healing, of withstanding and conquering both distance and time...


A metaphorical tale of lasting friendship


The story of the flower and the star…is about a friendship that is not allowed by the outside world. It is also a metaphorical tale about living and working with the options that are available to us. The trail of vine or climbing plant could be anything...it could be a way of reaching out to one another in the most difficult circumstances...or it could be the sharing of stories and artmaking through the Internet across vast distances and time zones.

Like the flower and the star in the following story, soul mates communicate through the climbing plant. The girl in the story is able to communicate with the star by sitting as closely to the vine’s stem as possible. The story is about using the love and respect two people feel for each other as a means of expression in their art, about trying getting over feelings of loneliness and pain and bending their hurt and despair into something positive...something that might even inspire others too, something good and positive that will survive the tooth of time...


The Story Of Earth Flower

To stretch so freely


In the morning rays


The flower she plays


A deeper look inside


See hidden on her face


Down to a special place


Where in quiet solitude


We are all but flowers


Thirsting for the moisture


That will make us bloom...

Once, in the center of Anishinaabe Aki, the land of the Ojibwe People, in a village at the foot of the Falls, a beautiful young woman lived who went by the name of Aki-waabigwan (Earth Flower). She belonged to Name doodem, the clan of the Sturgeon People.
Aki-waabigwan was not so much occupied with the same things the other young women her age were interested in. She spent most of her time roaming the hills and playing with butterflies in the valleys. She kept herself very busy going on adventures and learning new things and making new friends. She was very curious about the world around her. This is what made her truly happy. However, she was not only known among her People for her playfulness and her good nature; she also possessed an extraordinarily artistic talent.

Grandfather invited Aki-waabigwan into his wiigiwaam (domed birkbarch lodge) to sit with him at the fire, and after she entered the lodge she offered him asemaa (tobacco) and respectfully addressed him as follows: Nimishoo! Grandfather! If you allow me I will tell you now about what lives in my heart...then, as she was looking into his smiling eyes, she commenced to tell him about the stranger whom she had fallen in love with and her fear of never seeing him again in this life. Then, she told him about a dream-vision she had the night before:

“I lied down against the black
waiting to drift into the light
of my deepest and sweetest dreams.

My eyes had barely closed
to welcome the bliss of night when
I could feel his hands take mine.

How this real world changed
as my lids fell so heavy against my cheeks
that I could hear them shut.

As I opened them on the other side
it was like stepping into the universe
being drawn up by star people.

I saw him once before when so small
that my feet could barely take me
more than a few paces at a time.

Always just above my real sight
until the darkness came this dream
before I awoke today.

We travelled through them so vast
the constellations of stories past
I had been here before?

As my feet walked into the lodge
I closed my eyes and left again
Into the universe not for the first flight.

That was taken when just a child
A hand taken to a place of freedom
Where no sounds or feelings could come.

Where will I go tonight
When he comes
To take my hands...”


A Ladder to the Sky

Mishoomis, knowing that love knows not its own depth until the hour of separation, and understanding the depth of the pain and grief that shone through the dream-vision his granddaughter had related to him, sat quiet for a while before he spoke. Finally, this is what he told Aki-waabigwan:

"Ahaw, 'ngad aadzooke (Now, I will tell a traditional story).”

“A long, long time ago, GICHI-MANIDOO (the Great Mystery) created only strong and healthy Anishinaabeg. 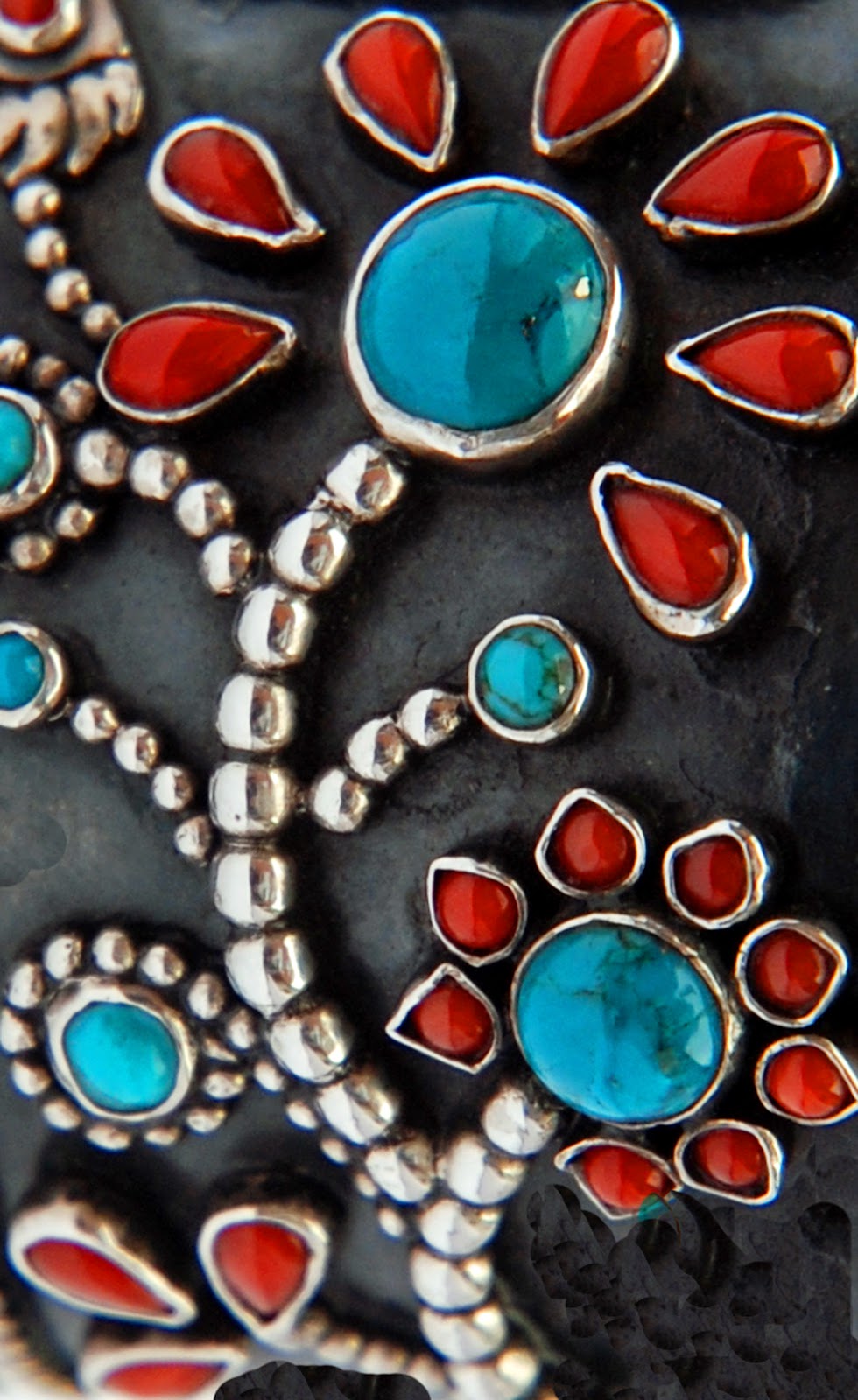 All were happy and prospered in Anishinaabe Aki, their turtle island home. Death was unknown to them. A huge biimaakwad (climbing plant or vineshoot) grew in the heart of Anishinaabe Aki.

It was a living ladder, connecting the Earthmother and her children with the realm of the Skyfather.

One day, because of the foolishness of an old woman who tried to climb him, the Trail of Vine collapsed under her weight. Disaster fell upon their happy homes, and the Anishinaabeg lost the gift of health and immortality.

Many, many left on Jibay-miikana, the path of souls...

Then GICHI-MANIDOO, feeling pity on the poor Ojibwe People, sent Wiinabozho with the Gift of Medicine. Called Wisakejak by our relatives to the north, Wiinabozho is a Spirit Messenger gifted with powers of transformation, the son of the West wind and a mortal woman, and very sympathetic toward our People...

So, Wiinabozho sought out a young man whom he called ODE’IMIN (Heart Berry or Strawberry), teaching him all there is to know about plants, roots, and herbs, and how to make the Standing People (the trees) lend their powers of healing and growing to the other beings.

Ode’imin, who thus became the first of a long line of Mide (Medicine) men and women, passed on his newly acquired knowledge, and our People became a healthy and prosperous nation again!

In order to keep alive the knowledge of curing and the wisdom of ANISHINAABE BIMAADIZIWIN (how to live a good life), Ode’imin founded the MIDEWIWIN, the Society of Medicine Men And Women Who are In A Sacred And Unseen State - a very old association of medicine people and philosophers that still exists today. And to this day, noozis, the MIDEWIWIN and the special gift of medicine are celebrated by the various peoples of the Anishinaabeg!
Giiwenh. So the story goes.” 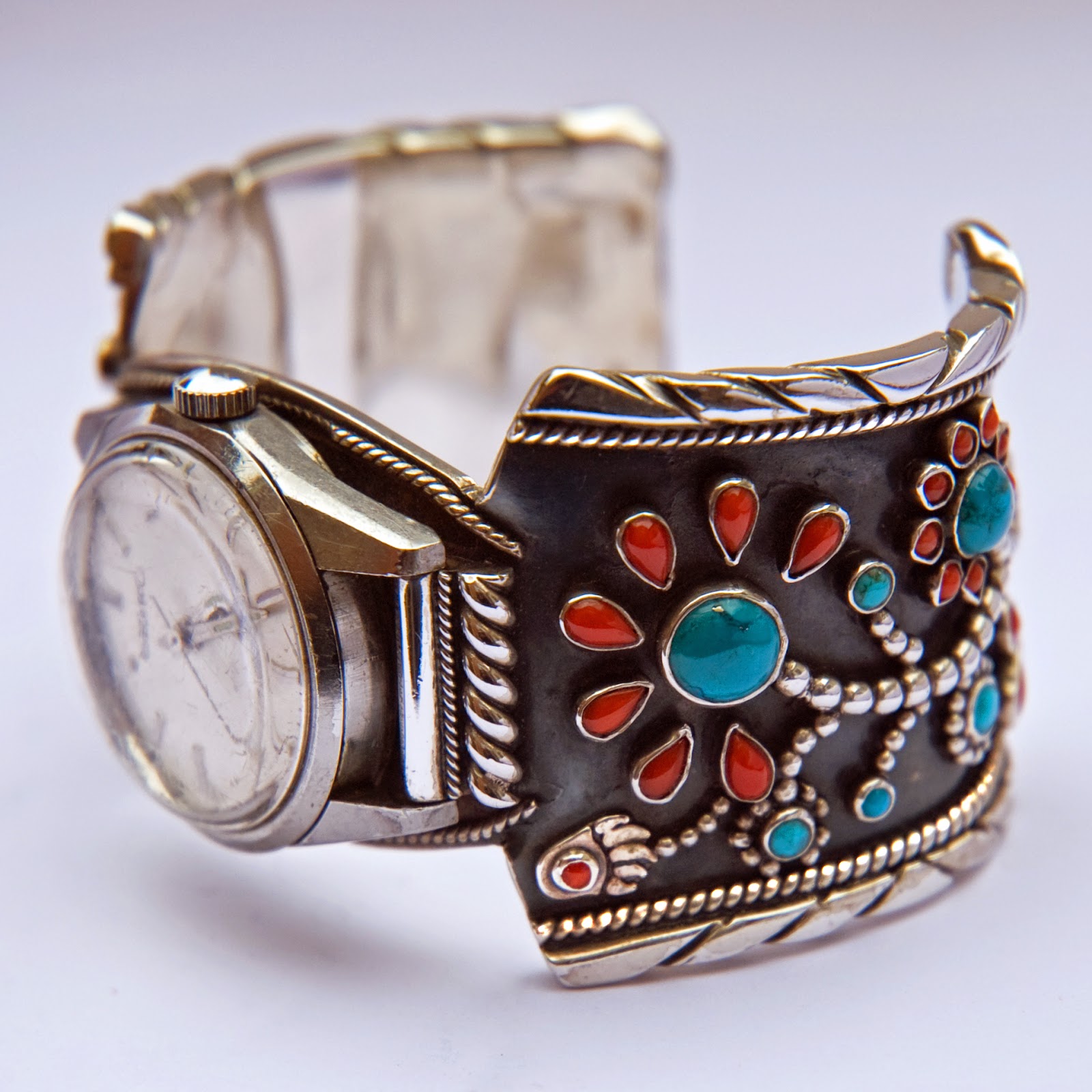 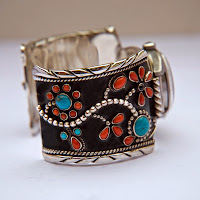 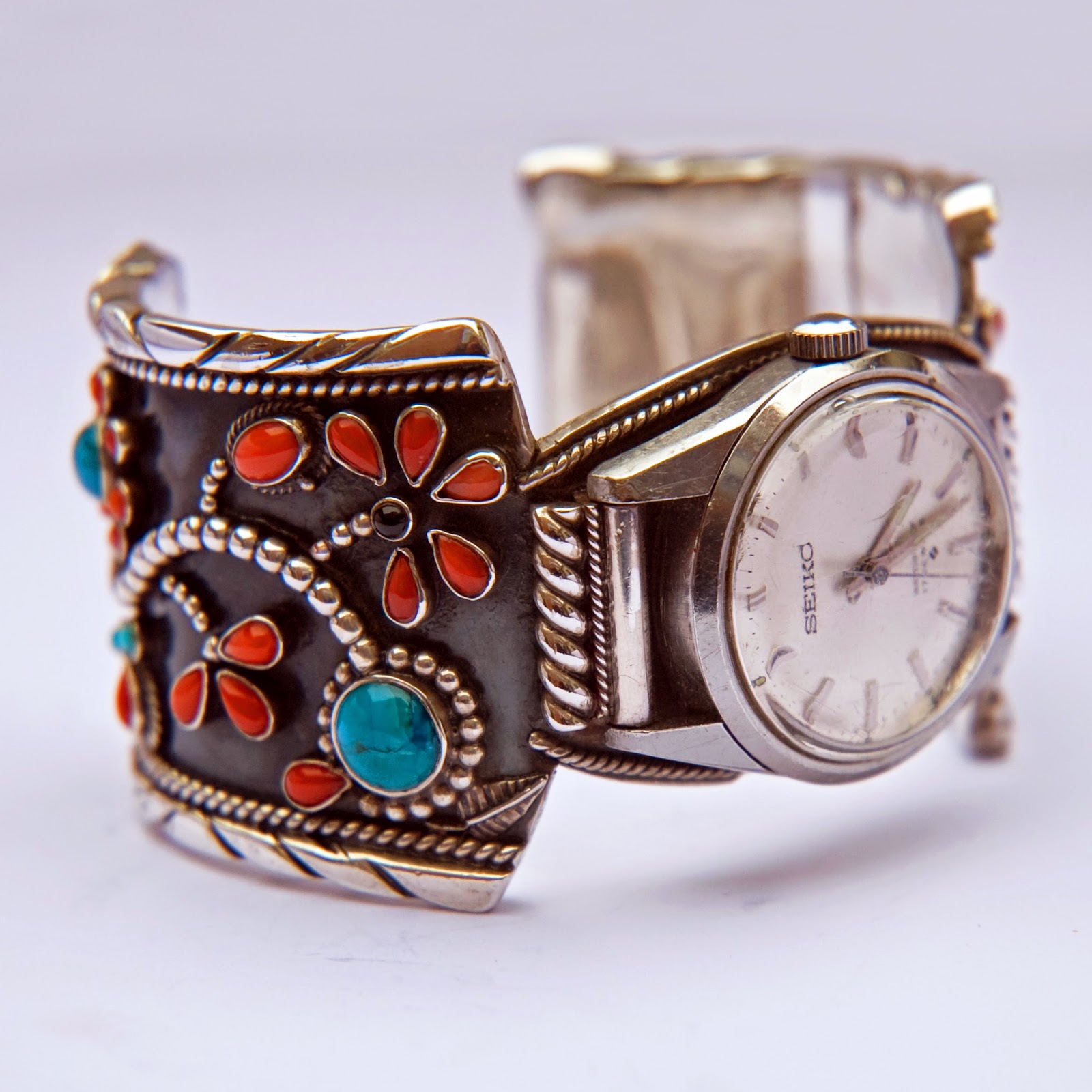 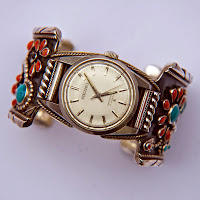 After pausing a while, Grandfather continued:

“I know noozis (my grandchild), this is a sad tale because it speaks of suffering and disaster, but it is also a story of great beauty.

I have told you this tale because I know you are not like that poor old woman whose desperate dreams made her climb the living ladder, this trail of vine whose branches reached all the way into the sky. You will learn to understand the art of reaching out into the sky world by sitting like a flower in late summer, staying as close to the roots of the climbing plant as possible. Through the climbing plant, you will talk and reach out to the star high up in the sky. This way the star will hear you and he will use the climbing plant to send to her his dreams and thoughts and words, to return to her the love she sends up to him. The star will know that the flower, whose voice he hears from up there, deserves to have the love she sends to him returned to her tenfold.

Although it is sad that the flower cannot use the trail of vine to live in the sky world forever, and the lone star cannot descend to the home of the flower that lives on the earth, the star will see that the flower flourishes each day a little more, and it will make him happy. It will make him so happy that at clear nights, the Ojibwe People will notice that the star shines more brightly on their homes than before. And the faces of the Ojibwe People will forever reflect the deep, shining love that the star holds for the flower.”

Grandfather concluded  with the lesson learned:

“Inside the tale of the climbing plant and Ode’imin who restored the gift of health and long life to the People, lives another, hidden tale. It tells the story about the flower and the star. This story is also about you and the stranger from the north and the eternal love you hold for each other. Be wise noozis, be like the flower in the story for she teaches us that the power of love to create healing is unlimited. Try to understand the ways of the heart and the healing medicine it holds. Do not get caught up in your dreams of longing and hurt and despair, do not spend your life dwelling on sorrow and mourning a lost love.

Breathe through your heart instead.

Be like the flower in the story noozis, and you will live to be a happy and strong person who is a shining example to her People."

Aki-waabigwan thanked her grandfather for the story he had told and the wise counsel that he had given her and she went outside, determined to do as her grandfather had suggested.

From that time on she passionately expressed her individual dreams and heartbreak, transforming it into works of incredible beauty and she gained wide and legendary recognition among her People and far beyond as one who creates healing art for the benefit of individuals as well as for the Nation - enh, for all Nations - as a whole. All of her works of art, initially inspired by the sad story of the Flower and the Star, became stories of hope, strength, and determination and until today her proud artistic legacy shines like the Fisher star above... 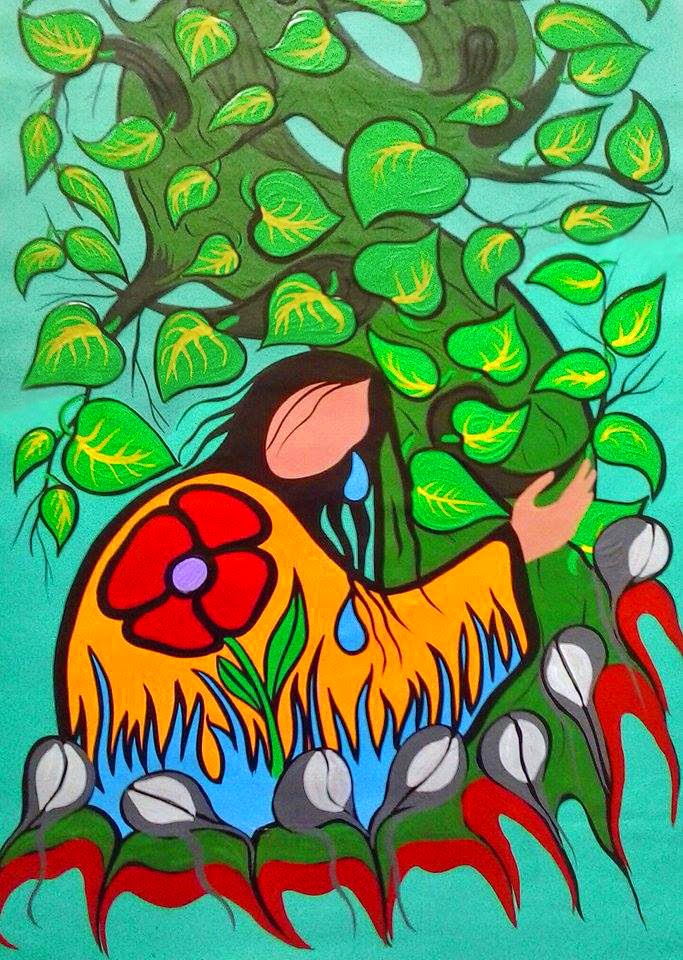 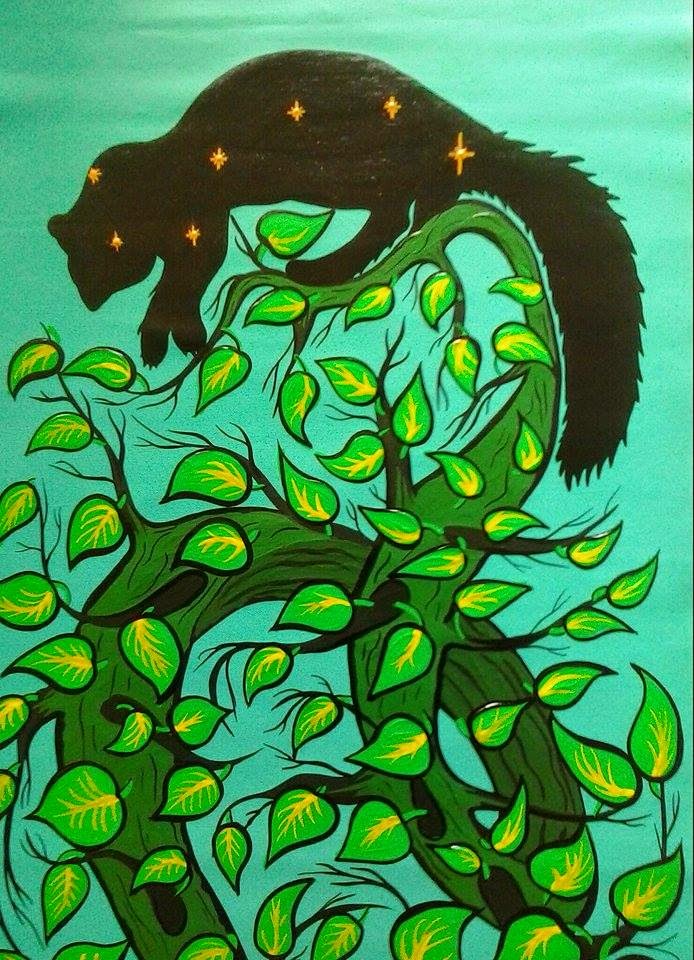 So the story goes. Thank you for listening to us today, to relate to you this sacred love story. Please come see us again!

Click here to read the fifth episode in the series "Love stories from the Land of Many Lakes":"Wenabozho and the Wild Roses."

Painting, acrylic on canvas by Simone McLeod: Waabigwan Miinawaa Anang (The Flower And The Star) 22"x60", 2014. For details, go to our website.

Proto-sketch of the painting the Flower And The Star, pen and ink drawing by Zhaawano Giizhik (2013).