Love Stories from the Land of Many Lakes, Part 8

“Native people know that everything in Creation has spirit. The plants, the trees, the water, the wind, the rocks and the mountains have spirit. The sky world, including the moon and other planets, has spirit. All of these are part of our first family, the natural world.”

Welcome back in my Storytelling Lodge where legends and teaching stories are told. This blog story is the 8th already in a series titled ‘‘Love Stories from the Land of Many Lakes.’’

It's a collection of love stories provided with jewelry images and illustrations of artwork by myself, and, sometimes, by kindred artists as well. The stories are based on aadizookaanan (traditional stories) of our People, the Ojibwe Anishinaabeg of Gaa-zaaga'eganikaag, the land of many lakes - the Great Lakes area of North America.
The narratives are teaching stories of a sacred, healing nature and told within a romantic context, their allegorical themes often provided with a personal touch.

The teaching story I tell today is a love story that, although inspired by a woman, is really about a spiritual journey. It's about zibii manidoo-babaamaadiziwin: the spirit-journey of ziibi, a river…The story features four ring sets and a matching pendant, all made by hand from multicolor gold, and a pen and ink drawing I did a while ago - all of which I lovingly fashioned around the theme of a flowing river.

A mystical theme inspired by the ancient spiritual belief system and the storytelling traditions of the Anishinaabeg Peoples. Stylized after the contemporary graphical style of the Canadian Medicine Painters of the Woodland School of Art and expertly forced into sleek and timeless designs of multicolor gold. It’s this unique combination of storytelling, styles, and materials that provides the matching jewelry that you find on this page with a signature that is typical of ZhaawanArt Creations.

The stylized designs of the jewelry displayed in this blog story are a metaphor for our spirit which, despite all ‘‘rational’’ constraints and limitations we tend to create for ourselves, is essentially as free as the flight of a bird – or, if you will, the course of a river.

“A River Runs Through My Heart”

The inlaid orbs in the pendant and matching ring set (see the above image), titled Zibii Zhaabojiwan Ninde'ing (A River Runs Through My Heart), connected by means of a free-flowing ‘‘spirit’’ line, symbolize seeds (which stand for growth and new beginnings) as well as the sun (representing illumination and enlightenment). Naturally, these orb designs are symbols of the most sacred nature whose meaning goes far beyond the obvious.
The flowing ‘‘spirit line’’ design, which resembles a free-flowing river, refers to a place beyond the material and beyond language, like a Spiritual realm, or a ceremony. It also implies the movement of spiritual energy that - in a ritual way – flows through the hearts of those who partake in the ceremonies of Midewiwin (the Society of the Good-Hearted Ones), Waabanoowiwin (The Dawn Society), and Giizis-niimi'idiwin (the Sun Dance).

A spiritual journey to a place beyond the visible

The title of the above wedding ring set, which stands out by its subtle color contrasts with warm and cool tones, is Babaamaadiziwin Biindig Inagakeyaa. The literal translation is “Journey Toward the Inside.”
Both the title and the design of the rings refer to the sacred life energy that, like a river, flows through us all and animates and invigoratres all life forms that surround us. This energy is called “ojichaag.”

What does biindig inagakeyaa, “toward the inside,” mean? Where is the “inside” at, and what does biinjina, “the inside,” consist of? To be able to understand this it’s important to ask ourselves, how did gete-ayaa’ag, our ancestors, perceive bimaadiziwin, or life? What was their concept of bimaadiziwin?
In traditional Anishinaabe thought, the countless phenomena, forms, and forces of the natural world specific to man’s immediate environment are chiefly to be interpreted in a cosmological context. All life forms are considered (more or less) animated and inter-related “persons” or “relatives” possessing a consciousness, rationale, and a will of their own. A human being or, for insance, a rock or a tree or a fish or a rain cloud are all seen as“persons.” All life forms are equally possessed by a spirit and a soul and a mind and there is simply no distinction between human or nonhuman.
In the traditional Anishinaabe conception, the earth, which Sky Woman - with the aid of a muskrat - created on the shell of a huge turtle, is flat. MIKINAAKOMINIS, or TURTLE ISLAND as it is called, is filled with the usual beings (plants, animals, humans, and features of the land) as well as the supernatural. Since the Great Mystery divided the creation into four inter-reliant orders– physical world, plant world, animal world, and human world – and four powers that compose the physical world – wind, water, fire, and rock – and subsequently sent four supernatural beings to the earth to teach mankind wisdom and medicine - Majiigaawiz, Papiigawiz, Jiibayaabooz, and Wenabozho -, it is only logical that the Anishinaabeg tend to group everything in fours.

Anishinaabeg recognize four divisions of time: the day, the night, the moon, and the year; four directions in the universe: east, south, west, north; four kinds of plant beings: flowers, grasses, trees, and vegetables; four plant beings connected with the four directions and considered exceptionally sacred: tobacco, cedar, sage, and sweetgrass; four parts in everything that grows from the earth: the roots, the stem, the leaves, and the fruit; four kinds of animal beings: those who fly, those who swim, those who crawl, and those who walk; and four hills that mark the stages of human life: babyhood, childhood, adulthood, and old age.
Likewise, in spite of the general Native American belief that a person – be it a man, an animal, a plant, a stone, or a rainbow - consists of three parts, being: body (the physical part), spirit/soul (the consciousness associated with the person), and a mind (which resides in the brain), Anishinaabeg gete-ayaa’ag sometimes distinguished at least four different component parts in each life form that are, to varying degrees, interchangeable.
These components were called: wiiyaw, which is the outward manifestation of self (the body, which may de-materialize into jiibay, or a ghost, after death); jichaag or ojichaagoma, which is a person’s true life force (spirit and soul, the core of self); jiiban, or a perceptual essence called “shadow” (a sixth sense); and jiibaaman (aura), which is an entity that emanates from a person’s spirit/soul/shadow.

By the same token, Anishinaabeg gete-ayaa’ag understood that a lake, or a hill, or a tree, or a blade of grass possesses (at least some parts of) these substances as much as human beings or fish or tiny insects do.
The possibility of interchanging body/ghost, spirit/soul, shadow, and aura within one and the same person, along with the occasional appearance of the jichaag of one life form in the wiiyaw of another, made the world of my Anishinaabe forebears an evocative dream world filled with mystery, a sometimes adventurous or even terrifying place to live in: things were often not at all what they seemed…
The understanding of this fluid and interchanging quality of the soul and spirit of all things alive (a theme expressed by means of the above wedding ring set titled Ninjichaag Onjigawi Aanikaji, or “My Spirit Flows Continuously”) led to a belief in a suggestive, magic world inhabited by aadizookaanag (supernatural persons capable of metamorphosis) and manidoog (spirits, mysteries). The world was a dynamic Universe filled with positive as well as negative energy that, like a river, flowed through it like a spring flows clearly through the heart of mother earth.

A river flows through us all...

It is in this context that I depicted this metaphor of a river of energy by creating – with the aid of the overlay technique - a recessed, flowing line in the top layer of the gold wedding bands. In the Manidoo-mashkawiziiwin, or “Mystery Power” ring set - see the above image - this coiling river design of yellow gold, which stands out against the respectively red gold and palladium gold surfaces, connects three or four dancing “spirit suns/seeds” (orbs). The omnipresent vitality of these orbs that appear to dance through the Universe  is emphasized by the – seemingly random - positioning of small “energy speckles” around the orb symbols.

The colorful and fluid design of these gold overlay wedding rings with their wavy "spirit lines" connected by four inlaid, orb-like "spirit suns," or "spirit seeds," evokes associations with dancing concentrations of life’s energy. The multi-tone design refers to the inner journey of two companions on the Path of Life searching for the essence of the love that binds them.
The sun or seed designs, which stand for concentrated, tightly clenched energy, are inlaid with smaller gold orbs of different colors; one of these inlaid designs consists of two halves of contrasting gold colors. These “unity symbols”  represent the sharp contrasts and the paradoxical dualities that exist in nature (the notion that everything is made up of several elements that seem at first sight contradict each other but in reality complement each other).
It is this spiritual dichotomy, or twofoldness, of powers that, like a free-flowing river and its surrounding land and watershed, continuously feed and complement each other, that lends a special symbolical dimension to this unique wedding ring set…

So the story goes...

About me and my sources of inspiration: 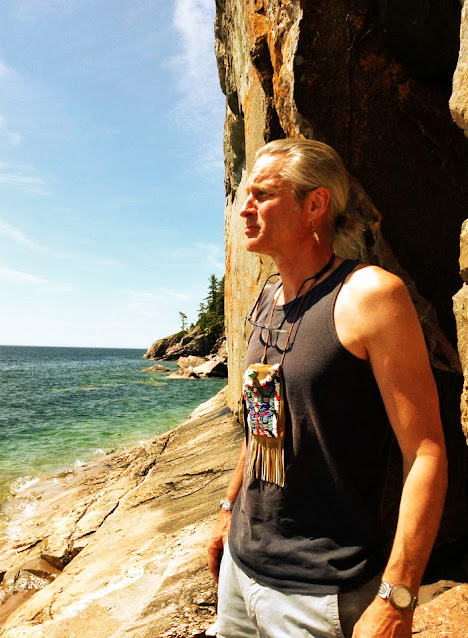 My name is Zhaawano Giizhik.
As an American artist and jewelry designer currently living in the Netherlands. I like to draw on the oral and pictorial traditions of my Ojibwe Anishinaabe ancestors from the American Great Lakes area. For this I call on my manidoo-minjimandamowin, or "Spirit Memory"; which means I try to remember the knowledge and the lessons of my ancestors. The MAZINAAJIMOWINAN or ‘‘pictorial spirit writings’’ - which are rich with  symbolism and have been painted throughout history on rocks and etched on other sacred items such as copper and slate, birch bark and animal hide - were a form of spiritual as well as educational communication that gave structure and meaning to the cosmos. Many of these sacred pictographs or petroforms – some of which are many, many  generations old - hide in sacred locations where the manidoog (spirits) reside, particularly in those mystic places near the coastline where the sky, the earth, the water, the underground and the underwater meet.