Love Stories from the Land of Many Lakes, part 9


"They Danced with Each Other" 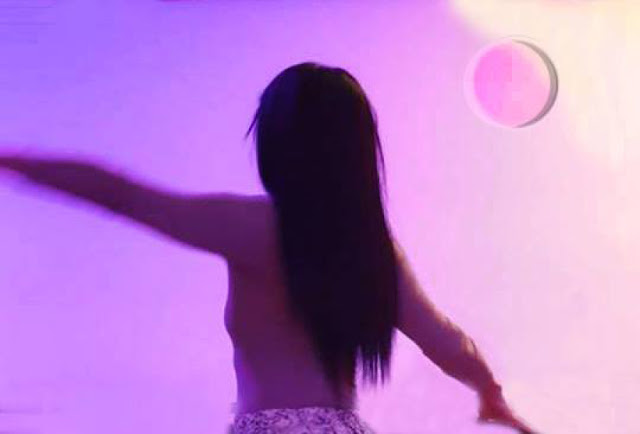 
A tale about two lovers who could not be together

Now let me tell you a sacred story...


Once upon a time in winter a lonely Ojibwe girl named Wezaawigiizhigookwe (Yellow Sky Woman) traveled all the way to the western shore of Naadowewi-gichigami (Rattle Snake Lake, nowadays called Lake Huron), which lay far to the southeast of her home on the northern shore of a bay called Binesii-wiikwedong (Bay of the Thunderbird, nowadays called Thunder Bay). A dream had told her to follow in reverse direction the flaming glow of waaznoode - which is how her People called the northern lights - that stretched from east to west across the night sky. These moving lights she imagined to be camp fires lighted by the grandfathers who lived in the milky way in order to stay warm in winter; also, she had been told the celestial fires illuminated Jiibay Miikana, the Trail of Souls that the deceased follow toward their final resting place among the stars. As Yellow Sky Woman followed the directions she had been given in her dream, travelling on foot at night, her gaze was continually directed toward the magic sheen of waaznoode, which could be seen in the northern skies, sometimes faintly, sometimes very clearly.
After two moons of travelling Yellow Sky Woman arrived at the westernmost part of the Rattle Snake Lake. Here she dreamt again. In the dream she saw the radiant image of a young man, tall, dark-skinned, with long braided hair the color of the sun. His name was Giizis (Sun). The moment the young man caught her glance he fell in love with Yellow Sky Woman. As Yellow Sky Woman noticed Giizis was looking at her with deep and fixed attention she knew she had cast a spell on the tall and handsome stranger. Yet at the same time she realized that he lived behind an invisible curtain and that they could only meet in winter, and then only in her dreams. As soon as spring arrived she decided with a heavy heart to return to her home in the west.

Since Yellow Sky Woman lived far away and would only meet the young man from the East in dream, and only in winter, the two lovers lay down together to rest in each other’s arms just for short periods of time. Although their times together were brief, Yellow Sky Woman touched Giizis's heart in unspeakable ways and vice versa; words fall short to express what they felt for each other. Only the spirit grandfathers high above understood the depth of the love that lived in the hearts of both lovers. Only they were able to grasp the scope of the feelings that these two beings on earth harbored for each other. Only they saw how hard it was for them to be separated by time, season, and distance. They were celestial orbs in each other's eyes, bonded together, dancing together, circling around each other. They were so close yet at the same time it felt as if they were forever beyond each other's reach...

However, the Elders of the Ojibweg Peoples, who felt sorry for the two lovers but also understood their tale to be one of faithfulness, loyalty, and hope, passed it on to the younger generations as soon as the cold spirit of biiboon visited the land - which, as you will know, is storytelling season among our Peoples. Thus, as soon as there was snow on the ground and the rivers and lakes froze over and the glow of the Grandfather's campfires set the night skies ablaze, the tale of Yellow Sky Woman and her lover the Sun came alive. And now their sad, but beautiful story lives on forever among anangoog, the stars high above... 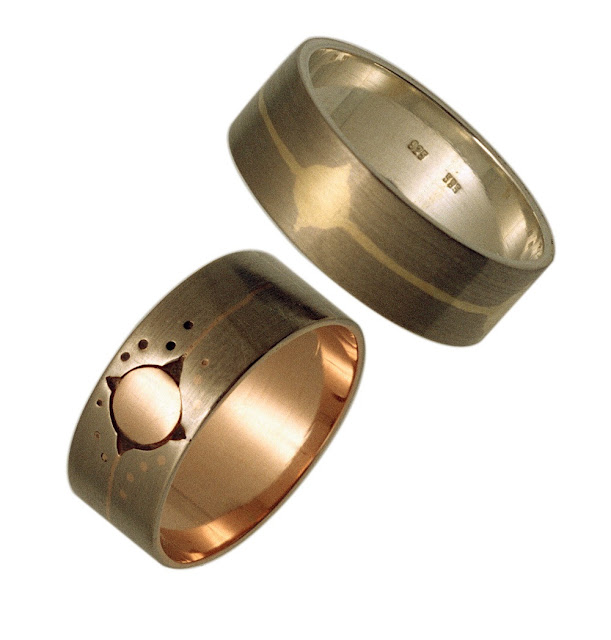 Now let me tell you the sacred story of these rings  ...


The title of the above ring set is ‘‘Ispiming, Gimishoomisinaan idash Gookomisinaan Niimi'idiwag." This is Anishinaabemowin (Ojibwe) for ‘‘Our Grandfather and Grandmother Are Dancing in the Sky."

The ring set is part of my wedding ring line Debwewin (Truth). The rings are handmade and consist of 14K palladium white gold exteriors. The interior of the men's ring is sterling silver; the ladies' ring has an inside of 14K red gold. The rings have inlays of red gold (the ladies' ring) and yellow gold (both men's and ladies' ring). Ring width: 0.28 inches (7 mm).

The designs of sun and moon (and stars) in these rings are complementary. Depicting the circular paths of the moon and the sun, the inlaid designs symbolize that everything in nature is round or circular. Also do they symbolize the union of two beings under the protection of the Universe and of a new beginning as they contain a promise of warmth, light, growth, and protection. But most of all the designs remind us of how much we are all connected with (and blessed by) GICHI MANIDOO, the Great Mystery of the Universe.


The inlaid men’s ring design (top right) – consisting of a matted outer band of palladium white gold and a highly polished inner band of silver – relates the tale of GIIZIS, the sun. My Anishinaabe ancestors referred to Giizis as He Who Stands above All, and Grandfather of all Life.

The overlay women’s ring (bottom left) is also executed in matted palladium white gold but has a highly polished interior of red gold. The ring shows a delicate inlay of red and yellow gold, of three images of DIBIK GIIZIS, the night-sun (moon), encircled by several red gold inlay speckles  (dots), symbolizing ANANGOOG, the stars. My ancestors referred to the night sun as Wezaawigiizhigookwe, Yellow Sky Woman, our Grandmother or Mother of all Mothers, representing the primacy of all women on earth, and the prominent role that women play within their communities and families. 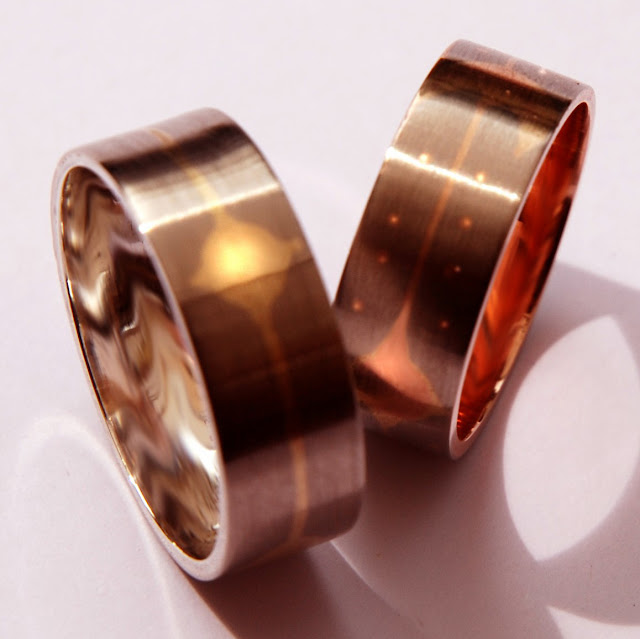 The three interconnected images of the sun distinguish the three phases or positions of the sun as he dances his daily cyclical dance: WAABANONG, the east, where he rises; ZHAAWANOGIIZHIG, the southern sky, along which the sun performs his daily ritual; and NINGAABII'ANONG, also called BANGISHIMOG, the west, where the sun sinks behind the mountains in the sea. Each new day Grandfather Sun performs His ritual dance from East to West, and as he gives and withdraws his light, the flowers, the trees, the grasses and the fruits of Mother Earth answer abundantly and without reserve. Thus the circle of birth, decay, and rebirth remains unbroken.

The grayish matted finish of the palladium white gold surface of the men’s ring is emblematic of the lead grey blanket of gloom that still covers the northern land when the warlike prevalence of BIBOON – the Spirit of Winter – ends; meanwhile, the subtly contrasting yellow gold sun images refer to the promising arrival of ZIIGWAN, the Kind-hearted Spirit of Spring. The brilliant white color of the highly polished silver interior of the ring refers to the clear light of sunrise in the east, the beginning of each new day on earth. 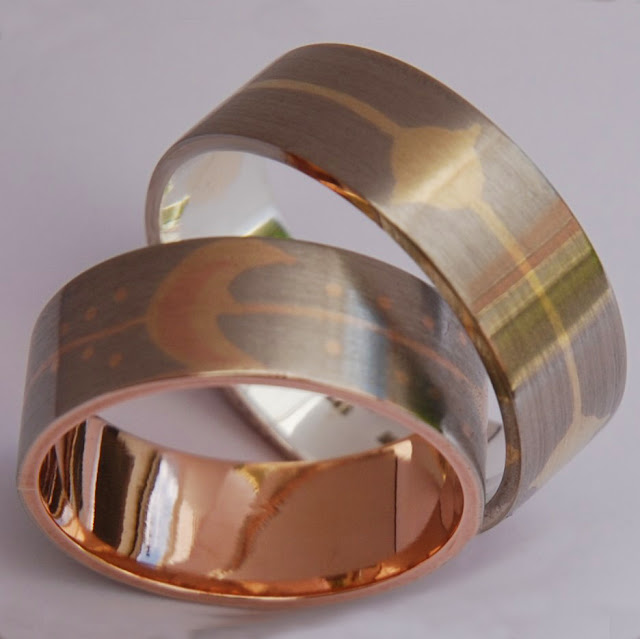 The women’s ring presents three red gold images of the monthly phases of the moon: a GIIZIS BAJISHKIWINE (crescent, see above image), GIIZIS AABITAAWIZI or a half moon – indicating she is in her first or last quarter, not visible on the photo – , and GIIZIS WAAWIYEZI or the full moon (see below image). The giizis badjishkiwine and the half moon, owing to a subtly fitted inlay of yellow gold, give the impression they're surrounded by a mysterious glow; the full moon shows her identity as ‘‘night sun" by showing four eccentric rays (see below image). 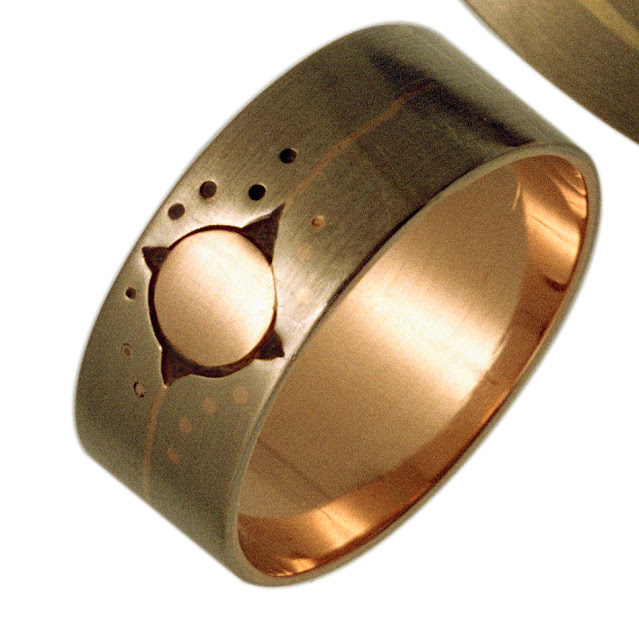 The color of the  palladium white gold women’s ring exterior stands for the calming moonlight at night. The ‘‘spirit line’’ connecting the three moon phases consists of inlay of red gold, producing a beautiful subtle contrast against the matted color of the ring shank. Specks of red gold, symbolizing the stars or the wiigiwaaman (wigwams) of the Sky Spirits, accompany the three moon figures.

The highly polished red gold interior, in conclusion, relates to the flaming glow of waaznoode, or niimidiwag, the northern lights. This natural phenomenon my ancestors associated with – and interpreted as –  spirits of dead relatives, or pathways or camp fires (lighted by the grandfather to stay warm in winter) to the soul. Within living memory the sheen of waaznoode can be seen in the northern skies, sometimes faintly, sometimes very clearly.

The red color could as well refer to the warm glow of sundown in the west; when it is the time of day that nightfall approaches and Grandmother Moon is about to rise in order to watch over her children and grandchildren on earth…

– Fragment of an old warrior song**

> Visit the websites to view detais of the rings

> Back to the Fisher Star Creations Love Stories blog page

About the author and his sources of inspiration: 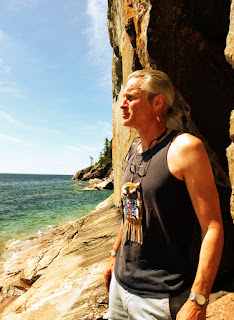 My name is Zhaawano Giizhik. As an American artist, poet, and jewelry designer currently living in the Netherlands. I like to draw on the oral and pictorial traditions of my Ojibwe Anishinaabe ancestors from the American Great Lakes area. For this I call on my manidoo-minjimandamowin, or "Spirit Memory"; which means I try to remember the knowledge and the lessons of my ancestors. The mazinaajimowinan or ‘‘pictorial spirit writings’’ - which are rich with  symbolism and have been painted throughout history on rocks and etched on other sacred items such as copper and slate, birch bark and animal hide - were a form of spiritual as well as educational communication that gave structure and meaning to the cosmos. Many of these sacred pictographs or petroforms – some of which are many, many  generations old - hide in sacred locations where the manidoog (spirits) reside, particularly in those mystic places near the coastline where the sky, the earth, the water, the underground and the underwater meet.